The covid pandemic has seen us re-learning the fine art of relaxation, finally being given the time and space we need to simply, quietly, peacefully 'be'.  But forget lounging pants, onesies and pyjamas.  You want to lounge the sophisticated way and that means you need turbans and kaftans!

They're exotic, they're beautiful and both turbans and kaftans have a fascinating history that taps right into today's trend for quality lounging.  So how did these two highly unusual items of clothing make their way into the legendary halls of Western fashion and how come they're still so popular?  In this second part we discover the magic of the kaftan and explore the sheer pleasure of wearing them.

The fashion for Kaftans – an obsession for more than a century

Isn't it interesting that the kaftan and the turban have followed much the same fashion trajectory, inspired by the early 1900s obsession with all things exotic and Eastern?  Probably originating in ancient Mesopotamia, the Ottoman sultans wore brilliantly decorated kaftans from the 1300s to the 1700s.  These garments were so special, so luxurious, that they were awarded as gifts to reward important people.  And in the West, fashion lovers have adopted them on and off, since the early 1900s.  They're still worn by both women and men in Iran, North Africa and West Africa, popular to this day because they're such a cool, loose and comfortable garment, especially in hot weather.

Both a powerful symbol of exoticism and an indicator of a bohemian lifestyle, these days the word 'kaftan' is used to describe almost any kind of loose robe or tunic.  But a real kaftan has a very particular look.  The cut is narrow, the robe itself is long, the sleeves are full and the neckline is deep, sometimes buttoned.  These days kaftans are made of every imaginable material, from natural fabrics like silk, wool and cotton to synthetics.

In the 1800s travellers, eccentrics and bohemians across Europe and North America adopted authentic kaftans imported from expeditions abroad.  These rebels fired up an already red-hot trend for Orientalism, but it took until the 1950s for kaftans to really take off, adapted by fashion houses like Dior and Balenciaga, who reinvented it as a loose-fitting evening gown or robe over matching trousers.  During 1966, when the trend was approaching its height, Vogue described the kaftan as an essential garment for every member of the 'jet-set', treasured by the world's so-called 'beautiful people'.

The kaftan kept on giving through the 1970s when the decade's vivid patterned fabrics and new-style synthetic fabrics took to the stage.  Highly patterned, colourful tent-like kaftans became the height of fashion, made using fabrics like Crimplene.  Some were densely beaded, others were simplicity itself, like those created by the turban-loving US fashion brand Halston.  The kaftan was worn for entertaining at home and by the young and rebellious who were following the hippy trail, discovering the exotic delights of foreign travel for the first time.

In the mid-1970s the kaftan bubble burst, leaving it behind in the fashion world but carrying on in leisure wear, worn on the beach, by the pool and for relaxing at home.  In 1996 it sprang back thanks to the designer Tom Ford, who shortened it to dramatic effect for Gucci's 1996 Spring collection.  Temperley and Matthew Williamson followed suit, as did Naeem Khan and Elie Saab with their amazing beaded and embroidered kaftans.

Comfort and style still sit at the heart of every kaftan and the garment remains a hot favourite for relaxation.

Can you imagine anything more soothing, relaxing, inspiring and comfy than a stunningly designed, beautifully made, silk kaftan?  Our deliciously luxurious pure Mulberry Silk Kaftan is inspired by Grecian goddesses, slimline and flattering.  It's classically designed to transcend time, whisking you away to a magical place of luxurious lounging.  It's made using 22 momme, cool 100% Pure Mulberry Silk, generously cut for a flattering fit with a pretty V neckline, a soft drawstring waist, gorgeous drape sleeves and side vents for free movement.  And it's available in cool Jade, dramatic Navy, shimmering Silver and truly decadent saffron.  Relaxing has never felt this good!

Why not team our stunning pure silk kaftan with a genuine silk turban to achieve the ultimate in luxury lounging experiences? And spare a thought for the millions of people throughout the world who have enjoyed that same fantastic relaxing feeling through the millennia. 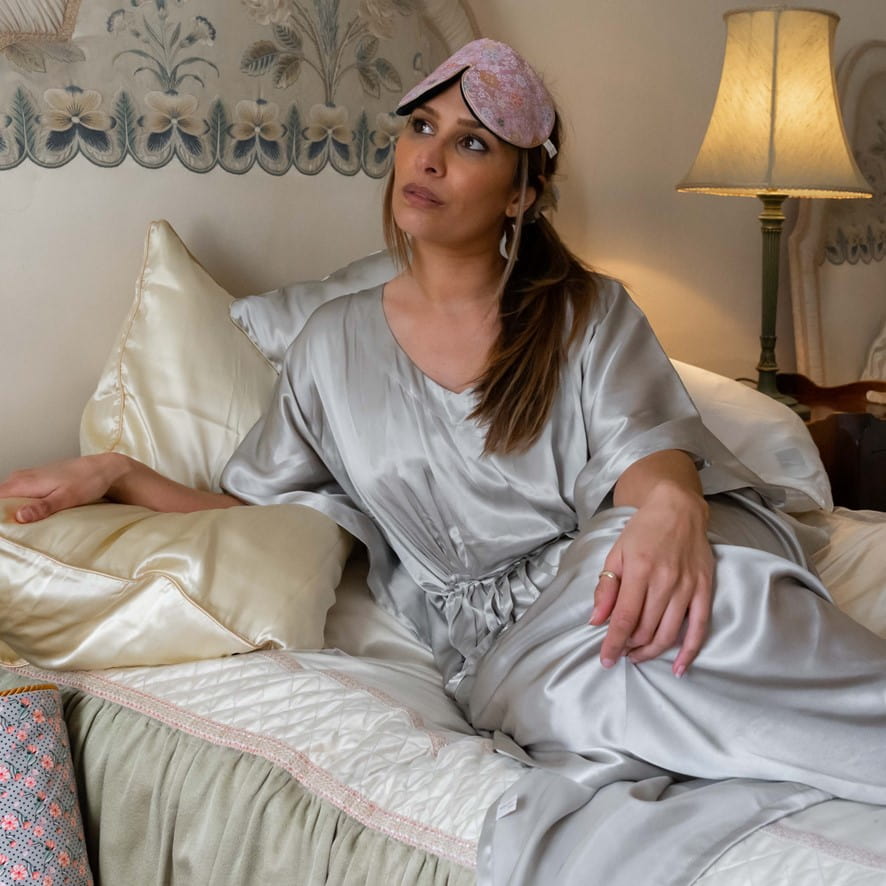